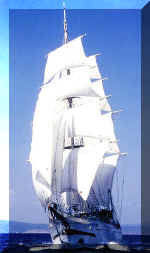 Comments: INS Varuna was completed in April 1981 by Alcock-Ashdown in Bhavnagar. It can carry only 26 cadets. Details above are given for INS Taragini, which is based on a Lord Nelson design by Colin Murdie, Lymington and has been built by Goa Shipyard. Three masted barque, square rigged on forward & main mast and fore & aft rigged on mizzen mast. Based at Kochi. INS Taragini is currently on a round-the-world training cruise. Click here for more info.

Comments: Garden Reach Shipbuilders & Engineers received a contract from the Indian Navy to build three LST(L) class vessels in 2002. A news article from the Indian Express, dated 09 June 2005, stated that these vessels were ordered by the Indian Navy in December 2001 and are expected to have an indigenous content of more than 90%. These vessels will be commissioned into the Indian Navy to support amphibious operations, carrying equipment, cargo & troops and providing a landing capability directly onto the beachhead. These landing ships, bearing battle tanks, accompany expeditionary forces during assaults on beaches. GRSE officials stated that the hull of the ship was fabricated and thereafter sent out to the fitting-out jetty. Vice Admiral Yashwant Prasad, the then-incumbent Vice Chief of Naval Staff, stated at the Kesari launch, "The GRSE has constructed this ship in just 17 months, right from the keel laying and have delivered a substantially improved vessel in its class." Shardul stands for the Royal Bengal Tiger, symbolising agility, strength and valour. The motto of INS Shardul is 'All for one, One for all.' It is the first vessel to be commissioned at the Karwar Naval Base. The warship got its name from an earlier warship of the same class that was decommissioned in 1997.

The ship can carry 11 main battle tanks, 10 army vehicles and 500 troops (excluding the ship's crew) for amphibious operations and can achieve a speed of 15.8 knots. The vessel will be capable of beaching for disembarkation of army vehicles and troops. The ship is also provided with helicopter landing facilities to accommodate the Sea King Mk.42 helicopter or the HAL Dhruv helicopter. Weapons onboard include surface-to-air missile & chaff launchers, a pair of WM-18 rocket launchers (manufactured by Larson & Toubro) and CRN-91 anti-aircraft guns (naval version of the 30mm Medak gun made in Secunderabad) mounted on stabilised optronic pedestals with a range of about 5 km and can fire at the rate of 500 rounds per minute. The vessels will be fitted with a propulsion remote control and battle damage control systems for efficient operation and control at sea. If required, it can act as a hospital ship and as a modified fleet tanker for stern re-fuelling of other naval vessels. India Defence Consultants reported on 26 June 2005, that Calzoni - the Italian subsidiary of American Kollmorgen - was awarded the contracts for supply of steering gear for the vessels.

A January 2003 news release from the MacGREGOR Group states, that a contract from GRSE requires MacGREGOR's RoRo Ships Division to design & supply three ship sets of access equipment for the Indian Navy's new LSTs. The LST designs are updated versions of the earlier Magar Class built by GRSE for the Indian Navy. Although designed to interface with the existing vessels' arrangements, the equipment  featured MacGREGOR's latest technology and will be upgraded in terms of safety to meet the latest requirements of the classification society ABS. In particular, this dictates stronger bow doors and the incorporation of additional inner bow doors; a bow ramp, vehicle hatch/ramp and hatch cover completed the outfit. A technology-transfer deal benefited one of the specialist divisions of GRSE by way of indigenous manufacture and engineering support for some hydraulic and mechanical components. The yard manufactured the main steel structures under MacGREGOR's supervision, further benefiting local production facilities. Rear Admiral T S Ganeshan (Retd.), Chief Managing Director of GRSE, stated that substantial design changes have been incorporated in these ships to improve habitability, operational efficiency and safety at sea.

An October 2003 news release from CAE states, that a $16 million (Canadian Dollars) contract was awarded to the company to supply the Indian Navy with integration and control systems for three of the Navy's new landing ships. CAE supplied prime contractor GRSE with advanced computer-based integrated platform management system (IPMS) technology that provide propulsion and damage control for the Navy's landing ships. For a second time, CAE provided the Navy with systems integration support services and platform system sensors. The work was carried out jointly by CAE's staff in Montreal, Canada and Bangalore, India and completed by mid-2006. The licensee of S.E.M.T. Pielstick in India, Kirloskar Oil Engines Limited, has received an order for 6 x 12 PA6 STC engines for the propulsion of three LST(L) vessels of the Magar Class. Maximum Continuous Rating (MCR) = 3880 kW at 1050 rpm and Maximum Rating (MR) = 4270 kW at 1084 rpm.

INS Airavat, the last of three ships, begun sea trials in July 2008 after completing basin trials in May. The ship was expected to be commissioned into the Indian Navy in December 2008 but was finally delivered to the Navy on 30 March 2009. Her CO is Cdr Manish Sharma.

Comments: Built by Tebma Shipyard in Chennai, these harbour tugs are part of a five vessel order being built for the Indian Navy. They feature a 25-ton bollard-pull swivelable rudder propulsion (SRP) system and greater manoeuvrability. Bhim achieved a 26.8-ton bollard pull against a 25-ton designed bollard pull. Bhim and Ajral serve with the Eastern Fleet at Vizag and Balshil serves with the Southern Fleet at Kochi. These vessels are expected to increase the capability of the Naval Ship Repair Yards, by berthing bigger vessels of the Indian Navy for routine maintenance and mid-life refits.

Displacement: 260 tons full load. INS Bitra is listed as having an empty displacement of 319 tons.

Maximum Speed: 28.5 knots with a sustained speed of 20 knots.

Complement: INS Bitra is listed as having 40 sailors and 4 officers.

Comments: The Bangaram Class are meant for interdiction tasks against fast moving surface vessels and search and rescue operations in coastal waters. The boats are also capable of generating a limited naval quick reaction force capability at short notice. The vessels are advanced in terms of ergonomics design and operational capabilities, when compared to the Trinkat Class. These boats will have a high indigenous content, with steering gear and deck machinery system from the GRSE engineering division, the air-conditioning system by ABB, the switchboards from GEPC, the DG sets from Cummins India, the living spaces designed by Godrej and the electronic equipment from BEL, ECIL and HAL. These vessels also have a built-in RO (Reverse Osmosis) plant for generation of fresh water at sea and a sewage treatment plant to protect the marine environment.

INS Batti Malv features modular accommodation from the Godrej Furniture & Interior Group. The special features of this accommodation consists of pre-insulated wall panels and ceiling panels. The cabin doors are fitted with all the required electrical accessories such as light fittings, communication requirements and air-conditioning. They are also fitted with total cabin marine grade furniture for accommodation such as bunks, personal lockers, seating, workstations, dining room furniture, wardrobe furniture, recreation room furniture, modular bath & water closet, etc. The key characteristic of the furniture is that it is manufactured from 100% aluminum to ensure light weight. It is also fire retardant and modular, which are the prime requirements of the ship. Being a turnkey project, Godrej's involvement was right from concept validation to product design & layout to manufacturing, supply, installation and finally commissioning.

The Talwar class has its origins in the Severnoye (Northern) Design Bureau that developed intothe Project 1135.6 vessel using an earlier Project 1135.1 design. This back to the early 1980s. The extensive scope of redesign and re-engineering for these vessels has realised a multipurpose surface combatant of about 4,000 ton displacement (this increase being attributed to additional weapon systems and the replacement of light alloys with steel), tailored to meet the Indian Navy's specific mission and performance requirements.