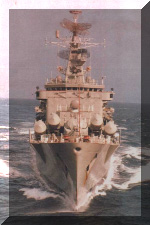 Structure: The Type 16 Class frigates are a modification of the original Leander Class design with an indigenous content of 72% and a larger hull.

INS Ganga and INS Gomati have been refitted with the Israeli Barak SAM system, with fire control provided by an EL/M-2221 STGR radar. The latter vessel was first sighted with the Barak in December 2002 and the system was reportedly operational by March 2003. It is probable that INS Godavari also has the Barak system, but that is yet to be confirmed through official channels. Prior to the fitment of the Barak system, these vessels had a single vertical launcher with the OSA-M (SA-N-4) SAM with SAR homing to 8n miles; 15 km at Mach 2.5, with a service ceiling of 3048 meters and a 50 kg warhead. A total of 20 OSA-M missiles were carried on board and they had a limited SSM capability. Fire control was provided by a single MPZ-310 (NATO: Pop Group) radar at F/H/I-band frequency, which has since been removed from the vessels that feature the Barak system.

Helicopters: Two Sea King Mk.42B or a combination of one Sea King Mk.42B and one HAL Chetak. Usually one helicopter is carried with more than one air crew. French Samahé helicopter landing equipment is fitted. The Naval ALH can also be embarked.

Countermeasures: Selenia INS-3 (Bharat Ajanta and Elettronica TQN-2) intercept and jammer is used for ESM/ECM purposes. Two chaff/flares are used as decoys. Will have the 'Super Barricade' decoys in due course. Also has a Graesby G738 towed torpedo decoy.

Comments: The superstructure is steel, though INS Godavari shows signs of poor welding. INS Gomati is the first Indian Navy vessel to have digital electronics in her combat data system. The ships have a unique mixture of Indian, Russian and Western weapon systems, which initially led to some compatibility problems.