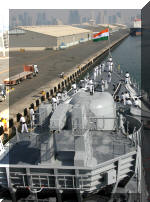 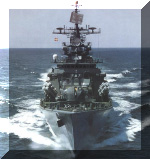 Structure: The Delhi Class design, for which Russia's Severnoye Design Bureau (SDB) acted as a consultant, are hybrids of Western and Russian technology - incorporating elements of the Sovremenny Class destroyer and the Rajput Class (Kashin-II) destroyer with the locally-designed Godavari Class frigate, including the frigate's most unique aspect, namely the large dual helicopter hangar for two Sea King Mk.42B helicopters. The huge missile blast deflectors, installed behind the KT-184 launchers, on INS Delhi indicate an original intention to arm these destroyers with the supersonic 3M-80 (SS-N-22) AShM which was later deemed too costly. INS Mysore and INS Mumbai lack these blast deflectors.

Navigation; Three MR-212/201 navigation radars, operating at I-band, are mounted on the foremast. JRC SATCOM (Satellite Communication) equipment is standard on these vessels. INS Mumbai can be visually differentiated from INS Mysore by it's cylindrical SATCOM antenna.

Weapons: Sixteen 3M-24E (Kh-35 Uran or NATO: SS-N-25 Switchblade) AShMs, housed in four quadruple KT-184 launchers, angled at 30º, two on either side of the bridge superstructure. Equivalent to the Harpoon Block 1C AShM, these missiles have active radar homing (ARH) out to a range of 130 km at 0.9 Mach, with a 145 kg warhead. All 16 missiles can be ripple-fired in 2-3 second intervals. The Delhi Class will be retrofitted with the GLONASS-steered, land-attack 3M24E1 Uranium AShM at a later date. The 3M24E1 AShM - export variant of the 3M24M1 - has more fuel, which extends range to 250 km.

Fire control for the missiles, is provided by a Garpun-Bal FC (NATO: Plank Shave) radar, mounted atop the bridge. This radar combines active and passive channels and in the active target designation mode, it operates in X-band (I/J-band) and can handle up to 150 targets at ranges between 35 - 45 km, although it is possible to obtain ranges of more than 180 km in wave-guide propagation conditions. The passive channel operates in the ESM mode searching for pulse and CW signals, and accurately identifying the bearing of hostile emitters from a built-in classification library of up to 1000 signatures. The maximum range of the passive channel is over 100 km depending on the frequency.

In the air defence role, a pair of 3S-90 launchers - one installed forward of the bridge and the other atop the dual helicopter hangar - are fitted with the Shtil SAM system. The Shtil system comprises of the 9M38M1 (SA-N-7, navalised SA-11) missile and 24 such missiles are carried in a below-decks magazine. The launchers elevate up to 70º but have a limited firing arc of 30º within the centreline. The launcher groups require a crew of 20 men and weigh about 50 tons. Target tracking data is provided by the MR-775 Fregat MAE planar array radar which can engage up to 12 targets at ranges of 32 km. Target illumination and semi-active homing is provided via six MR-90 Orekh (NATO: Front Dome) illuminators, four mounted forward and two aft.

One 100mm AK-100 single-barrelled, water-cooled gun, for use against ship and shore targets. The AK-100 can engage aerial and surface targets at a rate of fire of 30 to 50 rds/min and the turret can traverse through an arc of 220º. Fire control for the gun is provided by the T91E radar, a part of the MR-145 or MR-184 (NATO: Kite Screech) fire control radar system along with a turret mounted Kondensor optical sight. Each shell weighs 16 kg.

Four multi-barrelled 30mm AK-630 Gatling guns, two on either beam, to shoot down incoming anti-ship missiles, at 3000 rounds per minute to 2.5 km. Fire control is provided by two MR-123-02 (NATO: Bass Tilt) directors at the H/I/J-band frequency incorporating EO sensors (including laser rangefinder attachments) along with a manual backup sight for each pair of guns. Each gun can throw up a defensive wall of lead at 5500 to 6000 rounds per minute out to about 2.5 to 5 km. Unlike Western CIWS like Phalanx or Goalkeeper, this is not a closed loop system.

INS Delhi and INS Mysore have been refitted with the Barak SAM system and the pair of MR-123-02 (NATO: Bass Tilt) directors have been replaced by two EL/M-2221 STGR radars, in addition to deckhouse modifications. Two of the four AK-630 guns aboard INS Delhi and INS Mysore have been removed, to place vertical launchers for the Barak system. As of July 2005, INS Mumbai has not been fitted with the Barak system and still has its original equipment fit.

Anti-submarine armament comprises of two 12 barrelled RBU-6000 AS rocket launchers mounted in front of the bridge. These weapons are controlled by the Purga ASW fire control system. The RBU-6000 fires RGB-60 depth charge rockets to engage submarines at depths of 500 metres at a maximum range of 6000 metres The system may carry up to 192 rockets, each with a 31 kg warhead. It is likely that the new RE-91 ASW rockets could be retrofitted to these vessels in due course. They use the same RBU launcher complex.

Helicopter Capacity: Depending on operation requirements, two Sea King Mk.42B anti-ship/submarine helicopters can be embarked. The HAL Chetak or the HAL Dhruv, can also be used in combination with the Sea King Mk.42B. The 500 m2 flight deck with dual hangars has a 'Harpoon' type helicopter haul down system and two traversing tracks, each leading to a hangar compartment. This is very likely the French Samahé system. The ship is fitted with an integrated platform management system, possibly of French origin.

The Sea King Mk.42B is equipped with a surface search radar, dunking sonar and can carry two Sea Eagle AShMs or a combination of depth charges and AS-244 anti-submarine torpedoes. The helicopter can fly 400 km around the vessel and is equipped with a data link to download target data to the combat information centre, based on the indigenous Bharat Shikari (Hunter) combat data system, in the operations room. The combat data system, which is a derivative of the Italian IPN series of combat data systems, integrates Western, Russian and Indian systems, thus representing a remarkable technical achievement in system integration skills.

Countermeasures: The EW (Electronic Warfare) suite comprises of the Bharat Ajanta-II EW suite, along with the TQN-2 jamming system from the Italian company, Ellectronica. It is probable that the system is based on Israeli equipment, similar to the ones fitted on INS Viraat, and works in conjunction with the Russian PK-2 decoy launcher system. This employs two ZIF-121 launchers mounted on either side of the rear funnel stack atop the helo hanger and the Tertsiya fire control system. The PK-2 is employed in the confusion and distraction modes using chaff, IR and visual-optical decoy rounds. Confusion mode is used to confuse incoming missiles while distraction mode is used when enemy missiles are searching for and locking on the ship. Each launcher has 100 decoy rounds. Stern mounted noise generating torpedo decoys are also used.

Comments: The Delhi Class are the largest warships ever to be built in India and primarily act as command and control platforms for task groups and as screening escorts for the aircraft carriers. INS Mumbai, is more advanced than the other two vessels in the Delhi Class though minor modifications are already taking place on INS Delhi and INS Mysore. These vessels are well suited for power projection roles in the Indian Ocean Region and are fully fitted with flag facilities. The Delhi Class is also capable of operating in a NBC environment and Radar-Cross-Section reduction is presumed to be minimal, to the extent that some sharp angles have been flattened.