Foxtrots of the Indian Navy by CMDE PR Franklin

Books exclusively on the Indian Navy's third dimension - the force multiplying submarine arm- are very rare - and this is probably the first by an Indian Navy submariner on this formidable Cold War warrior . This is a very welcome first anecdotal history of the Russian Project I 861 (Nato code name Foxtrot) - Indian Kalvari/Vela class submarines which pioneered India's submarine arm . 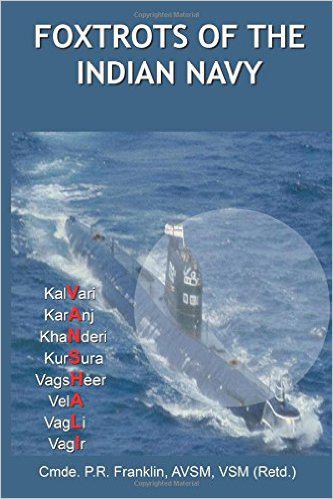 Commodore P.R. Franklin , the author and submarine commander , was trained in the former Soviet Union ,commissioned and commanded two of these Foxtrots and has penned these historical anecdotes which serves as a tribute to these robust subs. The author has coined an anagram of the 8 Foxtrot submarines (INS Kalvari, Khanderi, Karanj, Kursura, Vela, Vagir, Vagli, and Vaghsheer) into one main protagonist - the INS Vanshali to retain confidentiality and ensure a fast paced travails and tribulations of this sub.While this is not a historical book ,in terms of an official history or a chronological sequence of dates and events - it serves as an anecdotal history without specific dates, and is bound to evoke nostalgia from the crew who served and the reader who would be awed by the exploits.

The author states that the fledgling Indian Navy had been promised one sub from the advanced Oberon class by the UK in the mid 60's who subsequently demanded a huge sum ,disagreed on the payment terms and ultimately reneged on the same and it was the Soviets who offered the diesel electric Foxtrot class on much more lucrative terms which also included the barter of bananas and shoes !! All the initial complement for this submarine arm were volunteers who were brave enough to accept the challenges and risks of being a submariner.

The opening chapter describes the Foxtrot Class ,with a layout diagram on the topology of the submarine. This cold war warrior was designed to traverse an astonishing 36000 nautical miles (halfway around the world) without refuelling and was designed for extreme endurance for upto 40 days of continuous patrol . The durability of this class is confirmed by the fact that not a single submarine was lost during its operations from the late '60's till decommissing in 2006. We learn of the many hardships during the initial training in the Soviet Union when food was scarce and some of the "misadventures" and escapades of the team - also the arduous journey of crossing Africa (since the Suez canal was closed due to war) and the calling at many ports - Canary Islands , Nigeria with an interesting geo-political description of the times.

Was this part of the formidable US Seventh Fleet ? Possibly we will learn one day when the naval records are declassified or another submariner recounts his memoirs.The most interesting and sensational disclosure of the book is straight from one of the many Tom Clancy /Patrick Robinson thrillers - ie how one of the Foxtrots came close to firing a torpedo at a foreign "nuclear" submarine during the 1971 Indo- Pak war. The Foxtrot "INS Vanshali " which was patrolling the Arabian sea detected a Sonar signature of a submarine. It was identified as being of foreign origin and in "hostile territory" and the acoustic signature suggested it was possibly nuclear powered and as per the prescribed rules of engagement , Vanshali's commander could not engage unless it was engaged or fired upon first . INS Vanshali went into battle stations and the hunting engagement almost reached a thrilling finale when the other sub "blinked" and disengaged. What was this mystery foreign submarine ?

Cmde Franklin ,who has also written an authoritative book on "Submarine operations" for the National Maritime foundation, has included chapters on the complexities of undersea warfare , deception on the fleet exercises and torpedo practice firings which gives an amazing insight into the mind of a Foxtrot submarine commander who did not have sophisticated instruments like GPS and today's decision making tools like computer-controlled laser systems enabling bottom-contour navigation to assist him. The pace of the book is bound to keep the reader spell bound and the author has interspersed the serious narratives with a few anecdotes which are quite hilarious , like the unusual mascot selected for the Foxtrot fleet , more serious encounters with smugglers , near collisions etc .Also of interest is the tale of the Indian shipyards servicing Arab Foxtrots, only for the Israelis to sink them in war and comment on the unusual teamwork - "You repair them , we sink them".

However the closest suspect is Egypt which never had Foxtrots in their fleet but Romeos and the only other Arab country to sail this was Libya. Libya and Israel never had any official skirmishes - hence its very unlikely that Israelis sank any Foxtrot at all. The life of a submariner is exciting, uncertain and stressed , vividly described by the constraints of confined spaces , rationing of basic necessities like water , electricity etc and the reader can feel the thrill and uncertainties of submarine life where split second decisions are needed and a single wrong decision can have fatal consequences.

Cmde Franklin also states that if the Navy had been more decisive ,the Foxtrots would have played an impact full role in the "71 war - but on most occasions it was very conservative and risk averse. He reasons that despite the clean chit given by the Soviet trainers , India's operating chiefs were not confident of their ability and possibly feared diplomatic repercussions from an untoward incident .

The author has kept this largely anecdotal within the Foxtrot fleet when he could easily have drifted into an autobiographical mode . Also he has refrained from mentioning any of the hostile countries by name and careful to avoid revealing operational doctrines , but in another startling disclosure which will ruffle a few feathers , reveals the subterfuge employed by a few in the Foxtrot fleet to avoid the fleet exercises and possibly hide their shortcomings.

There are some important lessons for the Navy to imbibe and with the induction of the nuclear powered submarines like the Akula and Arihant class , the navy will play a major deterrent role. However, the author states that the diesel electric submarines like the Foxtrot and newer classes like the Scorpene and newer Russian classes will still have a long future due to its versatility and ease of use especially for operations in the Asian countries. Also its interesting to note that during the mid-life upgrade process , Indian battery technology was found to be superior to that of the Russians and these batteries were shipped to be utilised as critical replacements.

So what became of the Foxtrots ? As is customary and poignant they were scrapped , however in an exemplary move , the INS Kursura is now a "beached" museum in Vishakapatnam and available for the public to visit and visualise a submariner's life . This is quite laudable when considering the tragic scrapping of the INS Vikrant inspite of public petitions and lobbying , the callous powers-to-be were unable to spare the fifty crore rupees (approx USD 10 million) needed to convert the veteran aircraft carrier into a museum as a national memorial .There are also reports of a second sub INS Vagli being handed over for a second museum in Tamil Nadu. Incidentally the US also has acquired a Foxtrot and its on display at Long Beach , CA. The author's wish is for the Navy to continue the tradition of naming its newer subs with the previous Foxtrot subs - as was done for the Vikrant and esp followed by US/UK navies like the ubiquitous HMS Ark Royal .

For further reading ,I would recommend Time Life's Hunters of the Deep (1991) as a basic primer of submarine warfare and technology , Norman Polmar's Cold War Submarines (2005) for additional details and Joseph Chacko's excellent Indian submarine history "Foxtrot to Arihant" published by Frontier India (2015) . Indeed Frontier India should be encouraged by enthusiasts and the public to publish more such affordable unique titles.

To summarise , I would commend it as an excellent buy ,a must read and a great addition to the small genre of Indian Naval History .The few improvements I can think of ,are inclusion of photographs (currently less than half a dozen) , some preferably in colour and a bolder font facilitating easier reading. and perhaps an index/references for further reading .
FOXTROTS OF THE INDIAN NAVY deserves more publicity and readership from discerning members of Bharat Rakshak and is a great addition to the genre of Indian Naval History - albeit an anecdotal one. 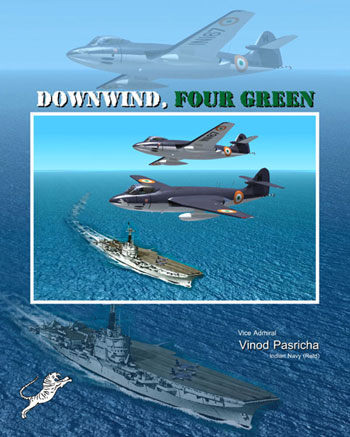 Book review of Downwind, Four Green, the history of the Hawker Sea Hawk in Indian Navy Service . "This level of detail was previously seen only in books bought out in the west, especially by authors in Great Britain. That an Indian Author had attempted this amount of detail is not only commendable but worth emulating over and over again.  If more Indian authors follow this example, then the British are going to have tough competition in their aircraft histories!." 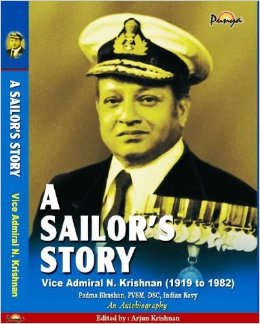